11 Signs You Need a Plumber in Melbourne 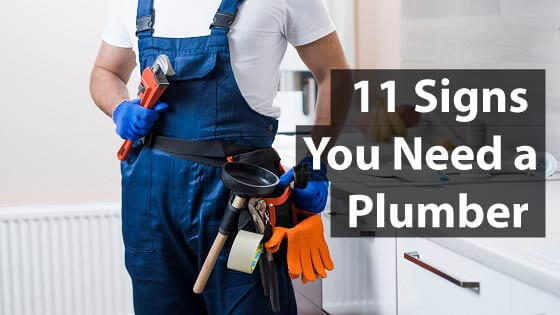 Sometimes, as a consumer, it’s difficult to determine whether or not you are in need of a plumber. It may be challenging to see the warning signs. However, waiting for emergencies to occur before contacting a plumber could result in higher plumbing costs and unnecessary damage to your property.

Those who are more aware of what the warning signs are and when to bring in a plumber can save themselves thousands of dollars, time and inconvenience. If you’d like to stay a step ahead of the game by bringing in a plumber during the early stages of a plumbing problem, then continue reading to find out more. We’ve put together 11 signs to let you know when you need a plumber in the Melbourne area.

If you notice that your pipes are knocking, while you’re taking a shower, while the sink is running or even while you’re filling the bathtub with water, then you know that you’ve got a plumbing problem. This could be due to several issues, which could create an even larger problem if the root cause is not addressed immediately.

Issues such as loose valves in the pipe system, loose support straps, water pressure that is over 16 PSI or other issues can result in your pipes shifting. Pipes that are not properly mounted could bend and create knocking sounds as well. In addition, the water hammer effect, which is the rise in pressure that occurs after a water service has been used and shut off quickly can cause a knocking sound. Whatever the issue, it’s a serious problem that requires the assistance of a qualified and well-trained plumber such as Heritage Plumbing.

If you are experiencing low water pressure, which means the flow of water out of the tap is weak, it could be due to a few different things. For example, there could be a clogged aerator, which can occur when the aerator has not been cleaned and there is residue that could be affecting the water pressure.

However, if this issue occurs in more than one sink, then you could have more serious problems, such as broken or cracked pipes that could be located under the foundation of your home or in the walls of your home. If this is the case, you should notice a leak each time water is used. Cracked or broken pipes that result in leaks can create a huge problem for your home and can be very costly.

Another common problem associated with continual dripping is the valve that is controlling the on and off tap settings. This should be checked by a professional plumber. Unfortunately, continued dripping can cause major permanent damage if not addressed immediately.

If your faucet will not stop dripping and drips several times a minute, it could be due to a very minor issue such as loose faucets or showerheads that can sometimes be repaired by tightening the area or by using some plumbers tape or adding a new bracket to the area. However, if that’s not the problem and you’re experiencing more of a steady drip, it could be due to a crack in the pipe. Once pressure builds up in the pipes, that could also cause constant dripping as well.

A blockage in your pipe is usually due to debris that has formed and worsened over time. If the drainage is outside of the home, it could become blocked due to debris that has been lodged inside your pipes after a rainstorm (such as dirt, leaves, rubbish, etc.). If the debris form in an older pipe, based on the type of pressure, it could create a puncture and create additional problems. If you suspect your pipe is blocked due to drainage problems or other issues, contact your plumber immediately.

If you notice that you have rust coloured water, or any other colour other than clear, you have a plumbing issue that requires attention. Even if the water is white or cloudy, that means there is air inside your pipes. Using this water is not healthy.

If the water is yellow, brown or red, you likely have rust inside your pipes, which is a sign that your pipes have aged significantly and need to be replaced. In any case, if your water has a colour tint to it, it’s time to call a plumber and fix your pipes.

If you are experiencing backflow issues, it could lend itself to other issues, like a bad odor throughout your house. This could be a sign of larger plumbing problems associated with the sewage system, which would require a specialist to come and clear the sewage area. However, it could also be due to minor problems such as drain pipes that are not ventilated properly or clogging over a sustained period of time. Heavy rainstorms could also cause a backup of water, which could have an impact on your overall sewage system and your pumps.

Plumbing problems that are associated with back up sewage problems are typically major and require the immediate attention of a qualified plumbing specialist.

If you wake up and discover that you do not have any running water at all, other than just a drip, then you should call a plumber right away. Especially if you discover that your neighbours also have similar problems, it could be due to a major problem that’s difficult to identify without the assistance of a professional plumber.

Ten percent of the homes in Melbourne have water leaks according to the City of Melbourne and waste on average approximately 10,000 gallons of water each year per household – this costs homeowners hundreds of dollars annually.

Depending on what geographical location you live in, you could have a major leak, frozen pipes, back up problems associated with the water main or other issues. What’s important is that you contact a plumber to evaluate the issue right away.

9. Water Comes Out But Doesn’t Get Hot

If you have running water but it does not get hot, that could be associated with a variety of issues. From something as simple as the hot water being used by another family member after taking a long bath or something more serious such as an issue with your water heater.

Another tell-tale sign that there is a major issue is if the problem persists and happens on a regular basis. A qualified plumber can analyse the problem and determine why there is an issue with the temperature. He will also be able to determine what the issue is associated with and make recommendations accordingly.

If you have a burst pipe, this could be the result of a major problem that requires your immediate attention. It could be due to frozen pipes that tend to expand by roughly 9% from its original size. In doing so, it expands with a great deal of force, causing additional pressure inside the pipes.

The pressure can take place when ice forms or if there is a weak spot in the pipe. In any case, you may be required to turn off your water at the valve and your electricity so a plumber from Heritage Plumbing can assist you immediately.

If you are having drainage issues, there could be a clog in your bathtub or in your sink. This issue will typically worsen over time which will result in even slower drainage problems.

Sometimes it’s difficult to determine what the obstruction could be and in cases where your pipes are older, they could burst due to debris that could be clogging up your drainage. It’s important to address drainage problems as early on as possible before it develops into a more serious issue.

Now that you are more familiar with the warning signs that indicate when you need to bring in a plumber, you should feel a lot more confident and equipped about how to minimise plumbing related problems. In addition, you can also hire a plumber for minor repair work and maintenance services on an ongoing basis to reduce the likelihood of major plumbing problems occurring in the future. Contact Heritage Plumbing today for all of your plumbing needs and we’d be more than happy to assist.  We can be reached at 03 9498 0458.

Related Posts:
How Much Does a Plumber Cost in Melbourne?
10 Questions to Ask a Plumber Before Hiring
7 Tips on How to Find a Plumber in Your Area